Ever wondered if there was a site on the Internet dedicated to Bingo Halls and where to find them? We are BingoLasVegas.com the leading authority on Bingo, Bingo state laws and bingo trends and supplies information.

In the US, the game is primarily staged by churches or charity organizations. Their legality and stakes vary by state regulation. In some states, bingo halls are rented out to sponsoring organizations, and such halls often run games almost every day. Church-run games, however, are normally weekly affairs held on the church premises. These games are usually played for modest stakes, although the final game of a session is frequently a coverall game that offers a larger jackpot prize for winning within a certain quantity of numbers called, and a progressive jackpot is one that may increase per session until it is won. 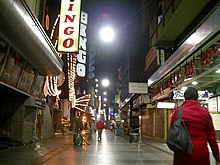 Bingo parlors in Buenos Aires, Argentina, where the game has become quite popular in the last twenty years

Commercial bingo games in the US are primarily offered by casinos (and then only in the state of Nevada), and by Native American bingo halls, which are often housed in the same location as Native American-run casinos. In Nevada, bingo is offered mainly by casinos that cater to local gamblers, and not the famous tourist resorts. They usually offer one-hour sessions, on the odd hours, i.e. 9am, 11am, 1pm etc. daily, typically from 9am through 11pm, with relatively modest stakes except for coverall jackpots. Station Casinos, a chain of locals-oriented casinos in Las Vegas, offers a special game each session, called “Jumbo” that ties all of its properties together with a large progressive jackpot. Most Bingo parlors in Las Vegas use hand held machines on which the games are played, except the Station Casino, the Fiesta Casino which has paper bingo cards and no machines. Native American games are typically offered for only one or two sessions a day, and are often played for higher stakes than charity games in order to draw players from distant places. Some also offer a special progressive jackpot game that may tie together players from multiple bingo halls.

As well as bingo played in house, the larger commercial operators play some games linked by telephone across several, perhaps dozens, of their clubs. This increases the prize money, but reduces the chance of winning; both due to the greater number of players.

Bingo halls are sometimes linked together (as by Loto Quebec in Canada) in a network to provide alternative winning structures and bigger prizes.

Bingo is also the basis for online games sold through licensed lotteries. Tickets are sold as for other numbers games, and the players get receipts with their numbers arranged as on a regular bingo card. The daily or weekly draw is normally broadcast on television. These games offer higher prizes and are more difficult to win.

The bingo logic is frequently used on scratch card games. The numbers are pre-drawn for each card and hidden until the card is scratched. In lotteries with online networks the price is electronically confirmed to avoid fraud based on physical fixing.

In recent years bingo halls have seen a decline in attendance and revenue. In Ontario, revenue at charity bingos has declined from $250 million to $50 million in the past ten years alone. Reasons for this decline include the expansion of competing forms of entertainment, such as charity casinos, race tracks with slots, large commercial casinos, and even movie theatres. In order to compete in this competitive marketplace, bingo halls have turned to technology to stem the decline. Ontario alone has opened five eBingo centres which give players an option to play bingo on a computer, allowing them to play at their own pace. In addition, electronic bingo has managed to draw in a larger male audience. The bingo industry is now lobbying the Ontario government to expand the number of eBingo centres in hopes of seeing a rise in revenue and attendance at bingo halls.[4]

Some gay bars and other LGBT-oriented organizations in both Canada and the United States also stage bingo events, commonly merged with a drag show and billed as “Drag Bingo” or “Drag Queen Bingo”.[5] “Drag Bingo” events were first launched in Seattle in the early 1990s as a fundraiser for local HIV/AIDS charities.[5] They have since expanded to many other cities across North America, supporting a diverse range of charities.[5]

Bingo has gone beyond a fundraising role and is often featured in bars and nightclubs as a social and entertainment event, attracting a loyal following of regular players. Many venues promote a bingo event to attract customers at off-peak times, such as weeknights and Sundays, which are traditionally slower for such businesses. The games are called by drag and non-drag hosts alike and often include ancillary activities such as cabaret shows, contests and other themed activities that add interest and encourage audience participation. Customers are invited to play for a chance to win cash and other prizes.